Yamato Igarashi (五十嵐大和, Igarashi Yamato) is a skilled pickpocket who makes a living off of what he manages to steal. He also works as a host at Club Adams on the side to make extra money under his host name Yamato Igarashi. He is a member of the Hakata Tonkotsu Ramens baseball team.

Yamato has short, blond hair, described as being porcupine-like, with a single red streak on the left side. He usually wears a dark grey suit and a black shirt, making him identifiable as a host.

He speaks in an informal, crude manner most of the time, but he has his flirtatious side when it comes to women. Due to his job as a host, he is very social and has a lot of connections to other clubs in Nakasu, and he is often knowledgeable about the local gangs and organizations.

He can be especially money hungry and is an opportunist, choosing to spend time working as a pickpocket in his spare time or on vacation to gain more cash. Regardless, he does care for his friends and while he will give them a hard time for inconveniencing him, he will go out of his way to help them. As a member of the Tonkotsu Nine, he frequently hits bunts that benefit his teammates on base, even if they result in his out.

Yamato bumps into Zenji Banba, managing to steal his wallet before attempting to run away. However, Banba is quick to realize what he has done and asks Yamato to give back his wallet. But upon doing so, Yamato reveals he had also managed to get his hands on the photo of the mayor Banba had been given as part of an investigation.

Yamato immediately recognizes one of the people in the photo as a host for Club Miroir, who was killed in his apartment along with his lover. He then explains that there are rumors going around that it was the work of a killer, who had been sent in to kill the host for stealing from his employers. Yamato goes on to tell Banba that Miroir is not only a high-class club but a dangerous organization. Yamato also tells him where the club is before Banba pays him for his information.

Later, Yamato runs into Xianming Lin, successfully stealing his wallet from him. Nevertheless, while Lin does not realize what he has done, he does not take kindly to Yamato bumping into him. Lin punches him and threatens him with a knife. After assuring Lin that he will get revenge, Yamato heads to Enokida, getting him to use the stolen wallet to find out Lin's identity. With this information, Yamato contacts Jiro Tanaka in order to get revenge on Lin by hiring the avenger to punch him.

The following week, Yamato participates in the Tonkotsu Ramens' first game with a full team.

Yamato joins the Tonkotsu Nine in a practice game in early summer, where he protests Genzo's suggestion of a punishment game based on base runs due to being a sacrificial bunt hitter. Lin's penalty from his poor performance on defense saves him, and during the team's pre-tournament get-together, he, Banba, and Jiro are the center of the party and get drunk quickly.

He introduces Lin as a hostess at Club Eve as a favor for Banba. A few weeks later, this backfires on him when Lin threatens to ruin his name by messing up badly at the hostess club in order to blackmail him for a favor. Unable to let Lin destroy one of his careers, he begrudgingly accepts Lin's request to steal money back from Abe and Yamamoto.

Some time later, he bumps into Abe and manages to take his wallet, but it does not contain all the money Lin had requested. After Jiro and Misaki paralyze Abe and José Martínez rams his vehicle into the pair's white van as part of his avenger mission, Yamato walks up to Yamamoto lying on the ground and brazenly takes the injured man's wallet, to the disgust of his friends looking on.

Yamato misses the weekly team practice at the end of June, but in early September, a month after the end of the story, he arrives at the fireworks festival ahead of the rest of the team in order to work his pickpocketing job.

Yamato receives a call from Banba with instructions to pickpocket Enokida's wallet. When he brings the wallet to Banba and Lin, they find inside only a folded piece of paper with a script written on it.

Yamato is present for the Ramens' weekly practice. 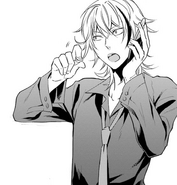 Yamato in the second manga volume

Community content is available under CC-BY-SA unless otherwise noted.
Advertisement